I purchased a used Alpha 87A amplifier from a local ham in April of 2007, and enjoyed using it for a number of months. One evening in October 2007, while trying to work some 160 meter DX, the amplifier faulted on keydown, turning itself off. Upon powerup, Fault code #1 appeared on the display. Trying again, same result — amp shutdown and fault code #1.

After an email, and no response for a couple of days, I called, and spoke with Technical support – Fault Code #1 is related to ‘pin diode receive’ issues — they even sent a nice document talking about troubleshooting it.  Since the schematics are online, and I’m concerned about shipping heavy electronic items back and forth due to the opportunity for damage, I decided to fix this myself… I ordered three PIN diodes, and after one lost package and three weeks, received them. With the new PIN diodes in hand, after opening the amplifier for the first time ever, I noted that the T/R board looked like this: 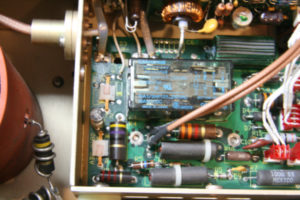 I noted that there were no parts on the T/R board resembling the diodes that were sent — email off to Alpha, a couple of days of no response — so I called and asked them to look at the email that I sent.  I was informed that I had a ‘downlevel’ amplifier, one that has not had all of the latest changes.  The original square ceramic PIN diodes were replaced sometime during the production run with two KS1001 PIN diode/resistors in series.

Also, since the newer diodes are more electrically fragile than the old ones, a spark gap (SGA).

Alpha was kind enough to send a ‘care package’ with the SGA and shunt resistors, which also was delayed for a couple of weeks. When that arrived, I called Alpha again to ask for some pictures of the PC Board area where the diodes were to go; even though the pictures sent didn’t indicate where the diodes went, they did show yet another part, an RF choke, from the amplifier output to ground (‘to drain off static during receive’). There was also a casual mention of increasing the bias on the PIN diodes by 200v with an addition to the zener diode string. While the zener addition *is* shown in the current schematic package on alpha’s web site, the rf choke and SGA are not.

Here’s a picture of the ‘downlevel’ power supply board (click on the picture for an even larger version):

I also asked another local ham to take a picture of the inside of his amplifier which had the fixes applied to the T/R board by Alpha: 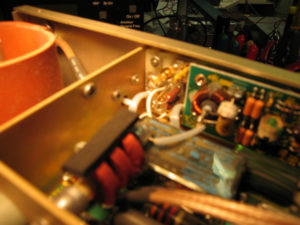 This conversation resulted in another order to alpha for the 1mH choke, more PIN diodes (spares), more 3.9M resistors to parallel the PIN diodes ($2.50 each yow!), and the 200v zener —  since I was paying handling and postage anyway.

That package arrived, with everything ordered except a 30v diode instead of a 200v diode.

Another phone call to alpha, a promise to send out a 200v diode.

Finally, with all parts in hand, it took about an hour to remove the old diodes, put in four pin sockets (per  the recommendation of the local ham with an 87A), insert the diodes/resistor strings, install the RF choke & spark gap arrestor, open and insert the 200v zener in the power supply section.  If you’re doing this, make sure you also have heat shrink tubing for the zener string in the power supply.

Here’s a picture of the T/R board modification: 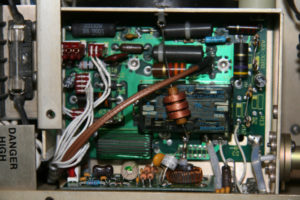 With the additional zener diode in the chain, the string of zeners now looks like this:

Once again, off to the races.